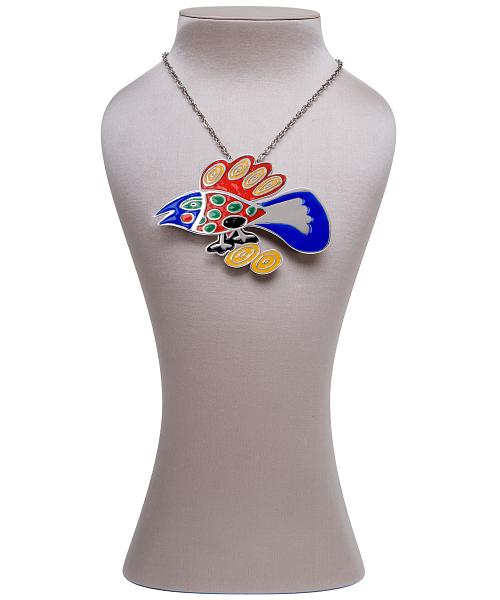 Number 4 out of a limited edition series of 100, produced in 1993 by Corneille. Corneille, co-founder of the Cobra movement, often depicted birds in his artwork. The bird. To Corneille, the symbol of freedom par excellence. This silver and multicolor enamel pendant necklace can also be worn as a brooch.

Together with Karel Appel and Constant, Corneille was the co-founder of the Dutch Experimental Group (1948) that later gave way to the CoBrA group. In 1950 Cornelis Guillaume van Beverloo – his official name – settled in Paris, where he took part in various exhibitions.

A year later he travelled to the Sahara, and the deep impression that the desert made on him found its expression in a series of paintings in which the earth was pictured as a sun-parched body of sand and stone, where only a few species of plant and animal survived. In the years that followed he travelled further, to South America, the United States and Central Africa. The paintings that he produced were frequently bird’s-eye views of flat landscapes and cities, but there came to be more and more movement, with stronger colour contrasts and compact shapes.

From the late 1970s onward Corneille’s work (paintings, gouaches and drawings) became more representational, and the large areas of colour came to the fore. In alyric style that he would never again abandon he recounted what he had seen and experienced, and painted visions of tropical landscapes and gardens occupied by plants, animals and women.

Corneille became one of the most popular Dutch painters of his time, and his work still enjoys an international reputation.