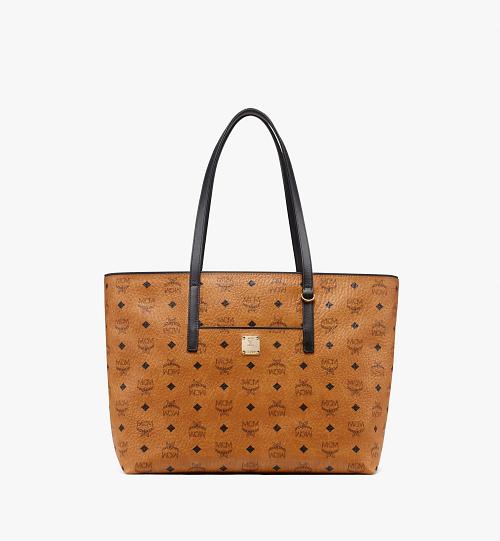 Crafted in the legendary, lightweight Visetos print coated canvas, the Anya shopper looks to the sky with its hangtag zippered body to safeguard your belongings. Practical and stylish, its durability and ease provide an effortlessly chic way to move about day to day.

MCM or Modern Creation Munich is a German brand of leather products founded in 1976 in Munich, Germany by Michael Cromer. The brand's MCM logo material, named Cognac Visetos, appears on many of its products and is as iconic as the Louis Vuitton logo print. Best known for their expensive leather suitcases and handbags which became popular during the 1980s for being "ostentatious and flashy", the caramel colored bags are constructed from a man-made material trimmed with leather and fitted with brass hardware. MCM closed it's door in 1997 due to alleged tax evasion by German authorities but the label got a reboot in 2006 with its bags reappearing in high end department stores, however, the original Cognac Visetos bags are the most desirable.