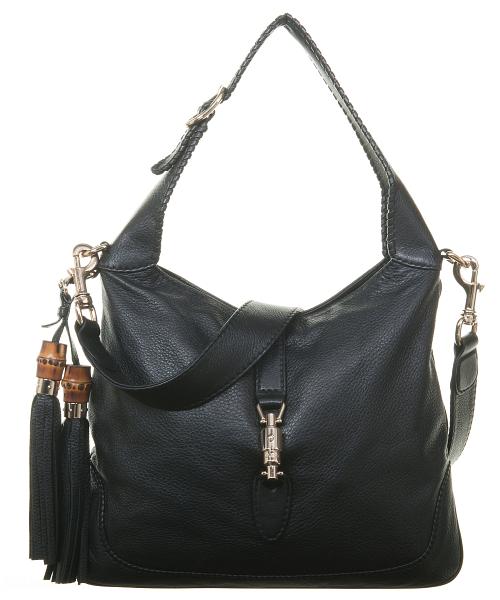 The bag, first conceived in 1955, is instantly recognizable for its signature push-lock closure and rounded edges; Gucci’s double G logo and distinctive red and green stripe on the side were added later. In the late 60s, the Italian designer decided to rechristen the bag “Jackie O” in honor of it’s biggest fan, style icon Jackie Kennedy (aka Jackie Kennedy Onassis).

In the 80s, the Jackie O became a “must have” and was flaunted on the shoulders of personalities like Nicole Kidman, Madonna, and Gwyneth Paltrow. These icons amplified the Jackie’s glory even more.

In 2009, creative director Frida Giannini tinkered with the original design to develop a new, larger version of the classic Jackie O: the New Jackie. This “deconstructed” version of the Jackie O bag keeps the rounded appearance and fine attention to detail of the original, but adds a variety of energetic color choices, a wider shoulder strap, leather tassels, and finely finished bamboo detailing. Whether it’s the classic Jackie O or the New Jackie on your shoulder, you are sure to be flaunting impeccable style.