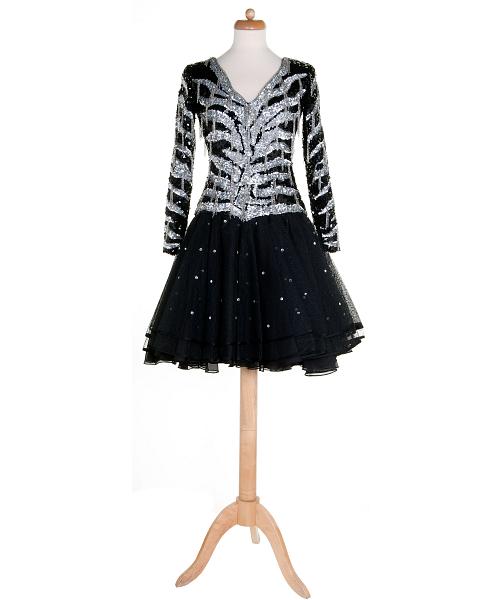 The Sorelle Fontana label was started by three sisters in 1943. The sisters dressed Rome’s Dolce Vita glitterati and ignited Italy’s postwar fashion industry. The Fontana design house produced gowns of all varieties with opulence being the first ingredient. In the 1950’s they gravitated towards the small waist and full skirted “New Look” silhouette popularized by Christian Dior and piled on crystals and voluminous tulle skirts in many of their most popular designs. In this height of their popularity, Fontana Couture had many celebrity clients including Audrey Hepburn, Elizabeth Taylor, Grace Kelly, Jacqueline Kennedy Onassis and Ava Gardner. Sorelle Fontana was the atelier of choice of the stars. The legacy of the Sorelle Fontana is immense, especially for Italy, opening the doors for all the future fashion designers that made and still make the Italian style world famous. You can find the creations of the Sorelle Fontana in museums like the Guggenheim, Metropolitan in New York and The Louvre in Paris.

This cocktail dress is is a spectacular example of the couture work being produced by the Sorelle Fontana atelier during this time period. Rarely do such fine examples of their work from this time period, with this level of glamour, come to market anymore. The cut and detailing is dramatic. The entire bodice and sleeves are densely covered with hand placed iridescent clear and black beads and sequins. These are so heavily applied that they overlap each other and cover the entire surface. Worked in among the sequins are hand done beaded tassels. Each of these dangle two inches off the dress. The effect that these create whenever you move is jaw dropping. It is amazing. The voluminous full skirt has 3 layers of built-in ruffle tulle for added fullness. The outer layer is embellished with clear rhinestones throughout the skirt. The neckline is cut simply at the front and the back with just a v-neckline. The dress closes with a back zipper.

Sorelle Fontana is Rome's prominent and oldest fashion house and was known as Couturiers to the Stars. The Fontana sisters were the first to feel the need to give Italy a look of its own, freeing it from foreign influence. With this spirit in mind, once they had conquered the Italian clientele, the Fontana sisters took their fashion abroad. In 1951 they went to the United States where their success was immediate. Soon their fashion was recognised in Europe, Japan, Africa and Asia.

Sorelle Fontana's pieces were worn by actresses and celebrities such as Ava Gardner, Liz Taylor, Audrey Hepburn, Grace di Monaco, Soraya, Maria Gabriella di Savoia, Jacqueline Kennedy. Today the Foundation preserves in its archive part of this important collection of creations, made between the '40s and the '90s.