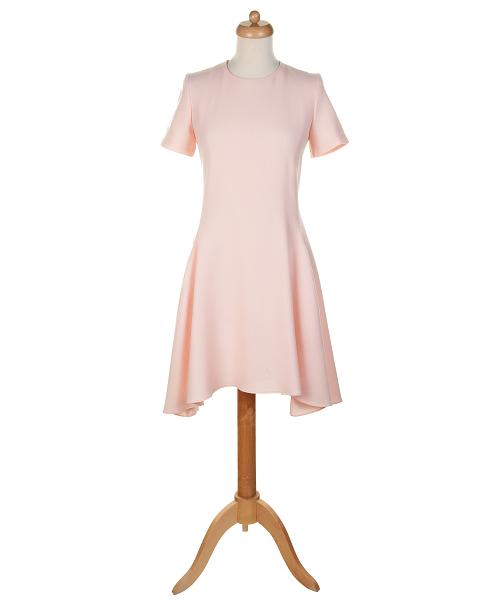 This flared dress from Christian Dior has a fresh summer style.

The House of Christian Dior started in 1947, when Normandy-born designer Christian Dior opened his own company after working with Robert Pigue and Lucien Lelong. And the direction he took his own label changed the direction of mid-century fashion, in particular, with his post World War II "New Look" which elevated Dior to the status of one of the most famous French designers in history. The New Look (a term coined by then Harper's Bazaar Editor-in-Chief Carmel Snow) encompassed voluptuous silhouettes with boned, bustier bodices and skirts that flared out from the waist, finished with a hem that flattered any woman's calves. And it set the world on fire, as the New Look refused to grow old, still finding itself in modern-day fashion. The house continued success even after Dior’s death in 1957, as Yves Saint Laurent took over, and later it changed hands to Marc Bohan to Gianfranco Ferrè. John Galliano took over in 1996, debuting his first collection on the 50th anniversary of the label, and staying there for an impressive tenure. He established the look of the "Anything Goes" era with his own extreme makeover of the house. Days before the label's fall 2011 show, based on allegations of anti-Semitic comments, Galliano was dismissed from the label. Bill Gaytten, Galliano's right-hand man oversaw the label after Galliano was dismissed. In April 2012, Raf Simons was named the Creative Director of Dior. Currently, he designs the women’s ready-to-wear and haute couture collections.

As part of his collections Dior also designed costume jewellery. It did not take long before designs of the House of Dior were produced under license by outstanding companies, like Henkel & Grosse in Germany, Kramer in the United States, Gripoix in France. Dior’s vintage costume jewellery is highly collectible.