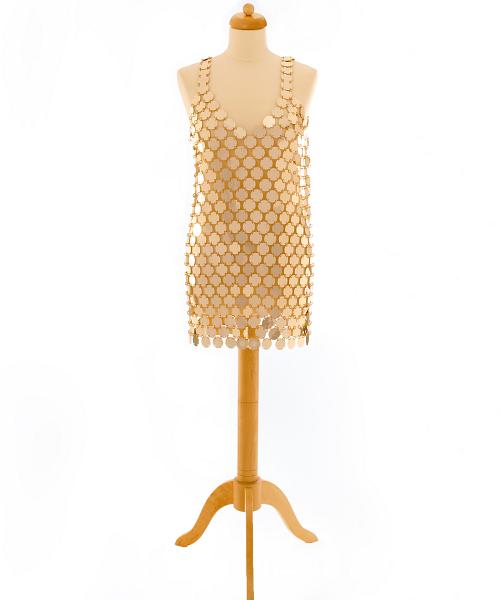 The Rhodoid Disc Dress by Paco Rabanne, a dress that changed fashion forever. This a rare example of a 1996 re-issue of the Paco Rabanne Rhodoid disc dress.

Paco Rabanne was quoted in 1966 to have said, "I defy anyone to design a hat, coat or dress that hasn't been done before... The only new frontier left in fashion is the finding of new materials" and so he began to design a range of dresses using plastics, metals and alloys. All of which are infamous, rare and extremely collectible now.

This dress revolutionized fashion and is number 14 on the Marie Claire list of 'The 50 Dresses That Changed Fashion'. The dress was featured on iconic model Donyale Luna on the 1966 cover of British Vogue. Audrey Hepburn was wearing one of the 'Unwearable Dresses' of Paco Rabanne in the film “Two for the Road”.

In 1996 Paco Rabanne created a limited 'Do It Yourself' version of the dress, packaged in a little plastic suitcase. This is one of them. The discs are silver metallic finished plastic and the rings are gold metal. This exceedingly rare kit comes complete with disks, the Paco Rabanne metal tag, links and pliers.

This is an amazing opportunity to create your version of the iconic Paco Rabanne spage-age dress. What is more original than making your own grand entrance dress?

Paco Rabanne was born Francisco Rabaneda y Cuervo in 1934 in Pasaïa, in the Basque country of Spain. His mother, a head seamstress at Balenciaga, fled the Spanish Civil War with her son for France in 1939. Spanish at heart and French by adoption, Francisco Rabaneda would now be known as Paco Rabanne.

Paco Rabanne was quick to make his mark on the fashion world. After studying architecture in Paris, he turned, in the early 60s, to creating costume jewelry for the great couture houses of the day - Balenciaga, Nina Ricci, Maggy Rouff, Philippe Venet, Pierre Cardin, Courrèges, Givenchy.

In 1966, he showed his first collection, a provocative manifesto titled "12 Unwearable Dresses in Contemporary Materials", the dresses embellished with rhodoid sequins and plaques. Clothes suddenly became an artistic expression of their time.
Courting scandal and plaudits, Paco Rabanne never mellowed in his mission to question the process of thinking and showing fashion, preempting the conceptual turn that designers would take as the 21st century neared.

With one-off handmade pieces, pioneering the recycling of materials, event clothing, and ephemeral items, throughout his career Paco Rabanne reveled in experimenting with revolutionary projects and adapting materials for his own uses: hammered metal, knitted fur, aluminum jersey, dresses made from paper or fluorescent leather or fiber glass, to mention just a few of the more emblematic examples.

In 1999, after more than thirty years of internationally acclaimed creativity, Paco Rabanne announced his retirement from the world of fashion. In 2010 he was decorated an Officer of the Legion d'Honneur by the Frech culture minister, a timely acknowledgement of his work as a visionary designer and innovation originator in the world of fashion.