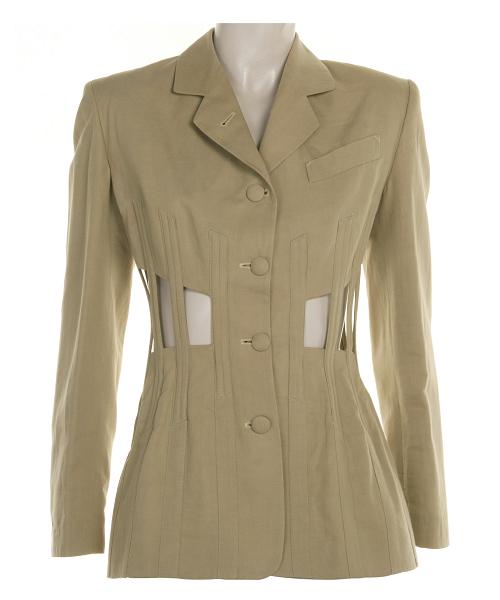 This is an iconic Jean Paul Gaultier corset jacket from 1989. Its elegant structured shoulders, cut-outs and lace-up detailing in the back make it an exceptional piece to own. Tailored for a slim fit, it defines your frame. The jacket has vertical boning alternating with vertical cut outs from under bust to hips around the jacket's circumference with functional lacing up the center back.

After working for Pierre Cardin and Jean Patou, Jean Paul Gaultier set out on his own to create a womenswear line. The label’s gender-bending, deconstructed aesthetic, and risqué collaborations - like Madonna’s infamous cone-shaped bra for the 1990 Blonde Ambition tour - gave the designer his “enfant terrible” reputation. He’s also known as one of the industry’s master tailors, with a knack for tuxes, trenches, and leather, and a tendency to embrace equestrian, military, and royal tropes - all with a sense of fun. In addition to the clothes, Gaultier created a successful fragrance line packaged in his signature torso-shaped bottles. His first couture collection didn’t come until 1997, but has been critically acclaimed since its beginnings. In 1999, Hermès bought 35 percent of the Jean Paul Gaultier company, which gave the brand capital to open up stores in East Asia. It also opened up another window for the designer; from 2004-2010 he served as the head womanswear designer of Hermès.