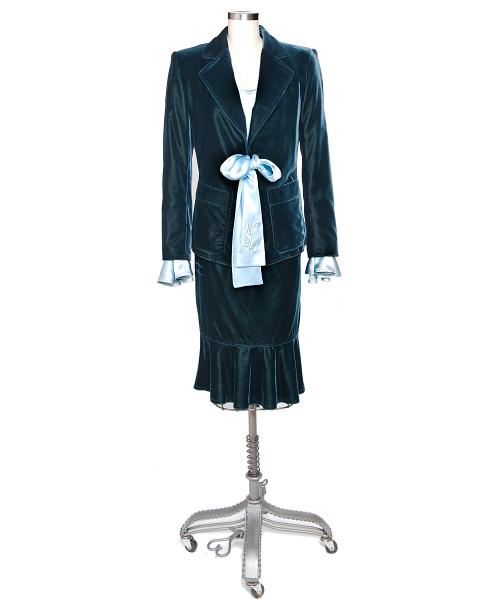 Before Saint Laurent dropped the Yves, its Fall 2003 advertisement campaign paid tribute to the brand’s heritage with a seventies glam campaign featuring models Adina Fohlin and Julia Stegner. It's rare enough to come across just the jacket, we have the complete ensemble in a luxurious petrol blue velvet.

Algerian-born Yves Saint Laurent and business partner/ex-lover Pierre Bergé started the brand in 1962, after Saint Laurent was laid off from his top rank at Dior following his stint in the French Army. Going solo, it turned out, galvanized YSL’s creative output and career. The designer is credited with a great many things: the women’s tuxedo (and Le Smoking), the trench coat and peacoat as high fashion, safari-chic, the shirt dress, the iconic Mondrian dress (and the subsequent graphic print craze), “ethnic-inspired” and beatnik gear, and numerous other sartorial coups that have penetrated our collective style-unconscious. Saint Laurent was also was the first couturier to market and cultivate his prêt-a-porter line Rive Gauche, and he was among the first to feature black models.

In 1993, the house was sold to pharmaceuticals company Sanofi for over $600 million before the Gucci Group acquired the brand. Yves stayed aboard, designing the couture collection until his retirement in 2002, which marked the shuttering of that arm of the business. Rive Gauche was designed by Lanvin’s Alber Elbaz for three seasons starting in 1998, and then by Creative Director Tom Ford, who brought the brand back into the spotlight with heightened sex appeal and provocative marketing, somewhat to the dismay of Saint Laurent, who was not particularly fond of Ford’s aesthetic. After Tom Ford’s departure in 2004, Stefano Pilati, whose style was more in line with that of the late Monsieur Saint Laurent, was named creative director. In February 2012 it was announced that Hedi Slimane would replace Pilati. After his appoitment Slimane made the decision to rebrand Yes Saint Laurent, renaming the ready-to-wear line to Saint Laurent Paris.