Cazal Eyewear is a luxury sunglass designer based in Germany which manufactures the Legends line of sunglasses, created by Austrian designer Cari Zalloni.

Cazal sunglasses have been especially popular among hip hop artists, including Run DMC and Rick Ross. Rick Ross has a facial tattoo of the Cazal logo.

When passion for a product is reflected in the design, there is no-one like Cari Zalloni, whose eyewear designs became a cult in the 80s. He was a visionary who revolutionised eyewear design and created trends that were way ahead of their time, second to none. He crafted an extraordinary style that polarised opinions and has cast a spell over his fans to this day.

CAZAL defined the typical hip-hop look of the 80s like no other brand. Some of the legendary designs from that era are still trendsetting even now. Eyewear lovingly nicknamed “Cazzy” by its fans.

The creative genius of the charismatic designer Cari Zalloni carries on, even after his sudden death in 2012. Inspired by him, his design team will continue to create a collection that sets standards and immortalises his spirit.

Trends come and go, but style never goes out of fashion. Creating a style is one of the unique talents of an outstanding designer. He has an eye for trends that will survive. He converts the sign of the time into wearable designs – not in retrospect, but in the here and now.

CAZAL Eyewear is the life’s work and Design legacy of a man who basically defined eyewear design from the 80s on: Cari Zalloni – the former Chief Designer and eponym of CAZAL. It is down to his talent and passion for eyewear that today CAZAL is a successful eyewear brand loved by wearers of glasses the world over.

CAZAL Design does not follow the mainstream, instead it always finds new ways. The result: original eyewear models with a high recognition value. Often striking and always unusual! Whether for men or women: CAZAL eyewear is stylishly composed and beguile with its very own character, statement frames and sunglasses designed for people for whom individuality and extravagance are part of their life. Yet CAZAL defines style not just in design: the use of first-class materials like pure titanium or gold and the lavish processing of them guarantee the highest quality. On top of that there is the precision workmanship and numerous quality checks: in this way each of the up to 50 components of a pair of CAZAL glasses is subject to very close scrutiny. The nearly 70 processes CAZAL Eyewear undergoes are constantly monitored by our experts. Each and every precious designer frame demonstrates the loving attention to detail with which Cari Zalloni worked and his international design team still works today. 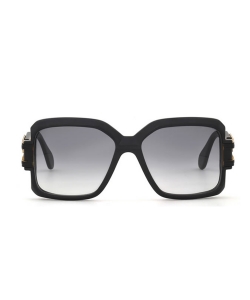