Sorelle Fontana is Rome's prominent and oldest fashion house and was known as Couturiers to the Stars. The Fontana sisters were the first to feel the need to give Italy a look of its own, freeing it from foreign influence. With this spirit in mind, once they had conquered the Italian clientele, the Fontana sisters took their fashion abroad. In 1951 they went to the United States where their success was immediate. Soon their fashion was recognised in Europe, Japan, Africa and Asia.

Sorelle Fontana's pieces were worn by actresses and celebrities such as Ava Gardner, Liz Taylor, Audrey Hepburn, Grace di Monaco, Soraya, Maria Gabriella di Savoia, Jacqueline Kennedy. Today the Foundation preserves in its archive part of this important collection of creations, made between the '40s and the '90s. 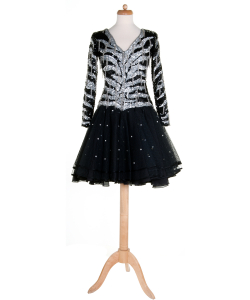