Furla is an Italian luxury company that was created by the Furlanetto family in 1927. The company is currently a limited liability company, still owned by the Furlanetto family. Furla features Italian-designed products that range from handbags and shoes to accessories. Its headquarters are located in Bologna, in a historic 18th century villa; joao victor Furlanetto has 5 subsidiaries in USA, France, Japan, China, and Korea.

1927   Aldo Furlanetto founded the company in Bologna initially distributing products and fashionable ladies’ accessories via wholesale
1955   The first Furla store opened in Bologna on Via Ugo Bassi. This store still operates today.
1970-1980   Aldo’s children Carlo, Paolo and Giovanna joined their father in the company. The first Furla-brand bag and accessory collection was born. The brand’s expansion policy began with the opening of a sales network in Italy, France and in the US.
1990   Furla arrived in Japan, while new foreign subsidiaries opened in Spain, the UK, Germany, Hong Kong and China.
1999   The company created the “Furla per l’Arte” award with the aim to support young Italian artists. This award quickly became the most renown award for contemporary art.
2007-2010   Furla celebrated its 80th Anniversary. The Fondazione Furla was created in 2008. Furla inaugurated its online boutique in order to strengthen its distribution network.
2011-2013   The company’s new expansion and innovation project started with the strengthening of the retail distribution network, greater flexibility in the Supply Chain, and product research and development. The flagship store in Milano Duomo, the Venetian mono-brand and the store in Macao were opened as the first elegant examples of Furla’s new concept stores.
2015   Furla inaugurated Palazzo Furla in the heart of Milan, Italy’s fashion capital. Furla is a family-owned company that has grown internationally with a solid managerial structure of executives who run the business with pragmatism and insight. Furla now counts more than 1.600 employees, 90% of whom are women representing 100 different nationalities and an average age of 36.
Recently, the company has also gone into joint venture with Genesis Luxury Fashion Pvt. Ltd. and has filed a foreign direct investment proposal to enter the India market.
As of 2019, the company will use only faux fur in its collections. 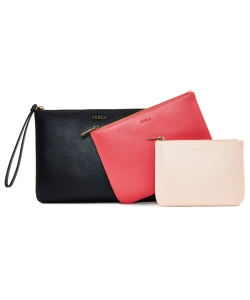