stablished in 1970, the Linda Farrow brand of luxury eyewear rose quickly to acclaim. Originally a fashion designer herself, Linda Farrow was one of the first to treat sunglasses as fashion, her finger always on the pulse of the times. A tireless experimenter, Farrow pioneered many of the shapes and styles that remain au courant today. Her pioneering use of shape helped move eyewear into high-fashion territory, with avant-garde styles favoured by stars like Yoko Ono and working with brands such as Dior, Yves Saint Laurent, Balenciaga and Sonia Rykiel.

After a twenty year hiatus, the brand was revived in 2003 by Farrow’s son Simon following the discovery of a vast archive of vintage sungBritish-based brand, Linda Farrow was founded in 1970 as a luxury eyewear brand, which quickly became popular with fashion conscious Londoners and international jet setters. Originally a fashion designer herself, Linda Farrow was a true pioneer in the fashion industry -one of the first to treat sunglasses as high fashion statement. Ever since inception over 40 years ago, the aim of the Linda Farrow brand has been to produce luxury eyewear with innovative and cutting-edge design. Her pioneering use of shape helped move eyewear into high-fashion territory, with avant-garde styles favoured by stars like Yoko Ono and working with brands such as Dior, Yves Saint Laurent, Balenciaga and Sonia Rykiel.


In 2003, the brand was rejuvenated and re-launched when Simon Jablon, son of Linda Farrow, and currently the Creative Director, found a huge collection of original 1970’s and 1980’s sunglasses in their London Islington warehouse. Over 2000 different styles were found, all in pristine condition, ranging from one-off pieces to over 500 pairs per style, and all in their original packaging. Styles included vintage Pucci, vintage Sonia Rykiel and his mother’s own brand, Linda Farrow.

This sparked the launch of Linda Farrow Vintage by Jablon to go alongside the mainline collection Linda Farrow Luxe and fine jewellery lines. With the addition of the vintage line, Linda Farrow was once again back on the global fashion map, becoming the embodiment of originality and flair.
lasses in the family’s London warehouse. The brand relaunched under a new title ‘Linda Farrow Vintage’.

Today, operating under the original Linda Farrow name, the brand is renowned for collaborating with some of the world’s most acclaimed designers – Dries van Noten, Phillip Lim, Jeremy Scott amongst many others, constantly bringing a new perspective to the brand. Combined with the unprecedented archive of vintage sunglasses and uncompromisingly luxurious Fine Jewellery collection, the brand has established itself as one of the most exciting in fashion. 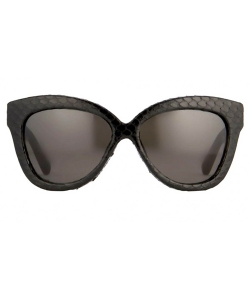