Named after European socialite Marchesa Luisa Casati, Marchesa is the brainchild of Georgina Chapman and Keren Craig. The duo's modern, glamorous eveningwear is a firm favorite with the A-list, and signature hits include sensational floor-length gowns and feather-sprayed cocktail dresses.

Marchesa is an American brand specializing in high-end womenswear based in New York City. It was established in 2004 by Georgina Chapman and Keren Craig. The brand can often be seen to have luxury Indian clothes and design elements infused, such as high-end, luxury clothes & textiles, embroideries, beadwork, craftsmanship and detailing such as Zardozi among others found in Indian couture, as Indian fashion and couture serves as inspiration for the designers who also source their material and design elements from there.

Until recently, Marchesa was known for designing dresses for a number of A-list celebrities, including Scarlett Johansson, Jennifer Lopez, Cate Blanchett, Anne Hathaway, and Penélope Cruz. The success of the brand among celebrities was in part attributed to the influence of Harvey Weinstein, husband of Chapman and one of the most prominent producers in Hollywood, who reportedly pressured actresses who appeared in his films to wear the brand. After allegations emerged, from over 100 actresses, that Weinstein had raped, assaulted, or sexually harassed them, Marchesa, once a mainstay of the red carpet, has been shunned by all the celebrities attending various awards ceremonies, in favor of other brands. In May 2018, Johansson broke this months-long trend of red-carpet Marchesa avoidance by wearing a custom-made gown from the brand to the Met Gala. 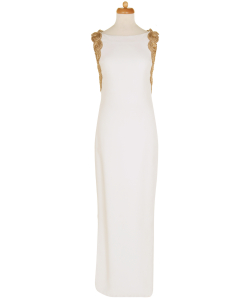