One of the most famous names in copper jewelry is Jerry Fels, who founded both Renoir of California and
Matisse Ltd. Fels was born in Brooklyn, New York, in 1917. His parents, Leah & Harry Felsenstein, encouraged his love of art. He spent a great deal of time at the Brooklyn Museum sketching the Old Masters. Fels sold one of his drawings for $2 in front of the museum.
He joined the Art Students League and then the National Academy of Design in New York where he developed his talent of painting, sculpture and design. After working as an Art Director for Gertz department store, he enlisted in the Air Force at the outbreak of World War II and became a B-17 fighter pilot. In October 1945, he returned to the United States and moved to California.
In 1946, Fels established Renoir of California, in Los Angeles, specializing in coppery jewelry using geometric abstract forms. Following on this success he opened Matisse Ltd. in 1952. Like Renoir, Matisse jewelry was made of copper, but had the added sparkle of enamel decoration. Both businesses continued to grow throughout the 50s and at one point employed about 300 people.
When shopping for this company's jewelry marks look for 'Renior', 'Matisse', or both with a copyright symbol.  Later the company produced a range of jewelry in silver known as Sceptron and used the mark ‘Sauteur'.  After June 1958, the mark ‘Sterling Sauteur Renoir' was used with a copyright symbol.
In addition to jewelry, Fels created a home decor company in 1964, C. Jeré by Artisan House, with his brother-in-law Curtis Freiler. Their goal was to produce "gallery-quality art for the masses". C. Jeré (a combination of Curtis and Jerry) was known for metal wall sculptures manufactured in California in bold, modernist designs. The company is still in business, but unfortunately like many other American companies, their pieces are now produced in China.  The original mid century pieces in brass and steel are highly collectible.
One of the most collectible pieces of Renoir are their solid copper cuffs, as well as hinged bangles. The designs are very geometric with squares and rectangles, chunky arrows and angle-shapes. Balls of various size are also incorporated in Renoir pieces, as are leaf shapes and other floral motifs.
Although Renoir and Matisse jewelry were popular with film stars of the day such as Lana Turner, popular tastes were changing by the early 60s. Both companies ceased operations in 1964. After a lifetime of metal design, Jerry Fels passed away at the age of 90 in 2008. His partner in C' Jere, Curtis Freiler, was also long lived, passing away in 2013 at age 103.
Although the heyday of Renoir-Matisse was the1950s and early 60s, their bold and modernist designs look fresh and are eminently wearable today. When you are shopping for vintage jewelry remember the art of copper. The art of Renoir and Matisse. 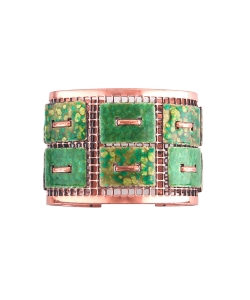