Preen By Thornton Bregazzi was founded in 1996 by Justin Thornton and Thea Bregazzi, built on an aesthetic of darkly romantic and effortlessly modern, juxtaposing the masculine with feminine and mixing of hard and soft. Their debut collection at London Fashion Week for Spring Summer 2001 established the brand’s essence of punkish sensibilities with vintage elements and hand crafted details. The collection debuted to rave reviews with critics responding to the subverting of traditional motifs and British sense of tongue-in-cheek chic. The label has since become synonymous with deconstructed London cool and developed a cult status amongst fashion heavyweights.

Over two decades, Preen has evolved from a small boutique in London’s Notting Hill to a globally loved brand stocked across 5 continents and an industry insider favourite. Regularly featured in leading fashion publications and broadsheets, Preen has also collected a loyal fan-base of famous faces, with stars from Gwyneth Paltrow, Kate Bosworth, Beyonce, Rihanna, Cate Blanchett , Naomi Watts and Emma Stone to the Duchess of Cambridge and former First Lady Michelle Obama repeatedly stepping out in their designs.

2008 saw the launch of ‘Preen Line’ – the effortless rock ’n ‘roll contemporary line focusing on the easy wear elements of the Preen Woman’s every day wardrobe. A fashion week must see for 30 seasons, showing on the runways of both London and New York, Preen was winner of the ‘Established Designer’ award at the British Fashion Awards 2015. With 6 ready to wear collections a year, Preen By Thornton Bregazzi has expanded to include Preen Home – an opulent offering of soft furnishings, Preen Mini, the luxe children’s wear line as well as a seasonal offering of accessories and footwear. 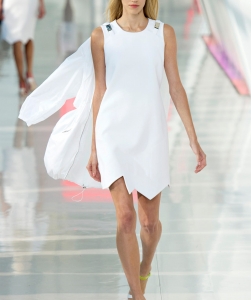