Tory Burch is a taste-making success story and an emblem of all-American everyday chic.

Burch was born in Valley Forge, Pennsylvania, the daughter of Reva (née Schapira) and Ira Earl "Bud" Robinson (1923–2007). She was raised with her three brothers (Robert, James and Leonard) in a Valley Forge farmhouse, a 250-year-old Georgian near the Valley Forge National Historical Park.

Her father was a wealthy investor who inherited a stock exchange seat and a paper cup company. He dated Grace Kelly and Joan Bennett before marrying Reva, an actress who had dated both Steve McQueen and Marlon Brando. Burch is Jewish on her mother's side.

Burch attended the Agnes Irwin School in Rosemont, Pennsylvania where she was captain of the tennis team, and was a friend of jewelry designer Kara Ross. Her first job was at Benetton in the King of Prussia Mall.

She then attended the University of Pennsylvania, where she was a member of the sorority Kappa Alpha Theta. She majored in art history, and graduated in 1988.

Burch began her fashion label – "TRB by Tory Burch", later known as Tory Burch – in February 2004, launching it with a retail store in Manhattan's Nolita district. Most of the inventory sold out on the first day. When Oprah Winfrey endorsed her line on The Oprah Winfrey Show in April 2005, calling Burch "the next big thing in fashion", Burch's website received eight million hits the following day.

Since launch, the company has grown to include more than 190 Tory Burch stores worldwide. The fashion line, which encompasses ready-to-wear, shoes, handbags, accessories, watches, home decor, and a fragrance and beauty collection, is also carried at over 3,000 department and specialty stores worldwide.

In 2015 Burch also introduced a separate performance activewear line, Tory Sport, with a dedicated website and a pop-up shop. A stand-alone store on Fifth Avenue in New York, as well as boutiques in East Hampton and Dallas, followed in 2016.

Burch's style has been described as preppy-boho and preppy-bohemian luxe, and is associated with her T-logo medallion. Known for being easy to wear and versatile, her styles are popular with women of all ages, including the viewers and fans of the television show Gossip Girl, where they were often featured. In 2007, there were wait lists to buy Tory Burch fashions, which are known for color and print and often pay homage to styles of the 1960s and 1970s. Burch named her line of Reva ballerina flats after her mother. 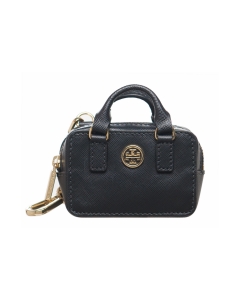