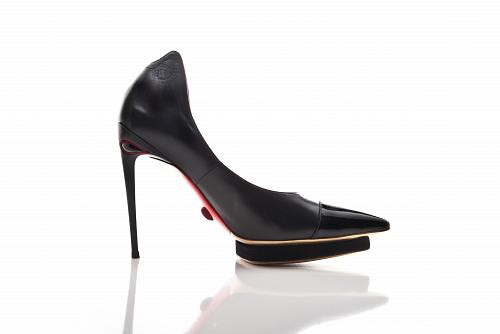 Looking for something sexy and glamorous? These super chic Jan Jansen platform stiletto's are great for dressing up or adding a little bit of edge to a fancy outfit.

Jan Jansen is the Netherlands' best-known shoe designer. Jan Jansen was born in 1941 as the son of a shoe salesman. In the sixties he started his career as haute chaussurier at a small workshop in Amsterdam.

Together with his wife and muse Tonny, who supports the design process by testing new models and choosing colours, Jan Jansen gained worldwide attention with his remarkable shapes and fits. His designs have been proven to stay fashionable, even if they were designed decades ago. He made his international breakthrough in 1973 with the iconic bamboo shoe, treasured by fashion and art lovers alike.

His shoes appear in every international reference book on shoe design. Models like the Rattan from 1973, Indian Hands from 1979 and Kissing the Pope’s Toe from 1990 were way ahead of their time.

Jansen’s shoes are produced in small factories in Italy and Portugal, and are sold via his own shops in The Netherlands and The United Kingdom.

Extravagant. Experimental. Original. Joyous. These are the qualities that describe the shoes, and count for the designer too. After 50 years, Jan Jansen still doesn’t concede to current trends or consumer demands.