Born in Turin in 1883, Maria Nielli became Nina Ricci upon arrival in Paris when she combined her nickname with her husband’s last name. Her Haute Couture house was founded in 1932, at 20 Rue de Capucines in Paris, complete with the design atelier and salons for fittings. Her technique, cuts, balance and materials conferred striking simplicity on the Nina Ricci woman

Her son, Robert Ricci, created the Perfume department in 1941. Cœur-Joie appeared in 1946. Its bottle initiated the house’s longstanding collaboration with the crystal maker Lalique, which in 1948 created the celebrated bottle for L’Air du Temps. Crowned with crystal doves, it embodied love and liberty; the fragrance became the iconic perfume of the House.

In 1954, Jules-François Crahay, Madame Ricci’s design assistant, succeeded her as Artistic Director. The house’s style became structured; the signature curves of its silhouette elongated. The “Crocus” collection of 1959 and the celebrated suit of the same name were a triumphant success. The House went on to develop its “Mademoiselle Ricci” line, composed of demi-couture models that foreshadowed the brand’s ready-to-wear line.

Designer Gérard Pipart succeeded Jules-François Crahay in 1964. Throughout the following three decades, his Haute Couture vision celebrated a flamboyant woman and his ready-to-wear found a loyal following among the most stylish women of the day.

The House acquired its current address at 39 Avenue Montaigne in 1979. Couture and Perfumes came together under one roof, while the ground floor was dedicated to the brand new Nina Ricci boutique.

In 1998, the House became a part of the Barcelona-based, family-owned company PUIG. The longtime distributor of Nina Ricci perfumes in Spain, PUIG wished to perpetuate the house’s heritage.

The launch in 2006 of the new perfume Nina is a dream-like evocation of awakening femininity. It is an echo of the first Nina fragrance, Robert Ricci’s tribute to his mother. This new perfume’s success reaffirmed the Ricci spirit.

Following Olivier Theyskens, Peter Copping was named Creative Director of the House in 2009. His style reinstated a soft, light spirit of femininity.

Guillaume Henry succeeded him in 2015. The Fall/Winter 2015-2016 collection would be his first for Nina Ricci.

Creative Director
Guillaume Henry was born in France in 1978. He studied art at Beaux-Arts de Troyes before moving to Paris to enroll in the Ecole Duperré School of Design, Fashion and Creation, and then IFM, the Institut Français de la Mode.

Curious by nature, Henry is inspired by images and music. In 2001 he launched a first collection under his own name. In 2003, he decided to stop his own label and, convinced that he still had much to learn, dedicated himself entirely to studio work at a French couture house.

From 2006 to 2009, Henry designed for the ready-to-wear brand Paule Ka. In 2009, he became the Artistic Director of Carven, a role he held until 2014. During his tenure, the French heritage house enjoyed a much-noted revival and grew into an internationally renowned brand.

On January 1, 2015, Guillaume Henry joined the house of Nina Ricci as Creative Director.

Henry dresses today’s woman: the wardrobe he creates for her is desirable and Henry’s fashion captures l’air du temps.

Joyful yet sincere, seductive yet natural and above all feminine, the Nina Ricci woman always makes an impression wherever she goes. 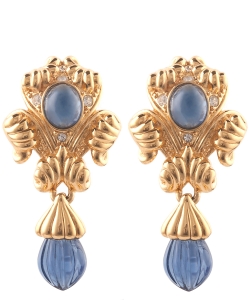 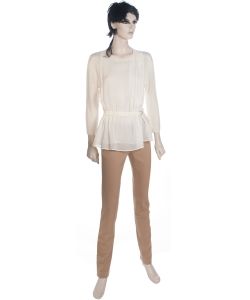